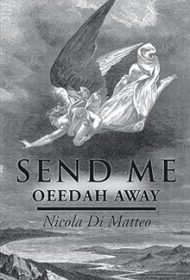 Nicola Di Matteo’s Send Me: Oeedah Away is a Christian fantasy novel following the adventures of Mark Oeedah and his brothers.

Mark and his siblings have just received a series of divine messages from their long-dead father and a chorus of archangels revealing an astonishing reality: There is another world mirroring our own, known as the Earthly Paradise, and the beings of that world (human spirits known as Escatons and fallen angels called Omens) exert control over the events of our own realm. The Omens are threatening to use their influence to wage war in both worlds. And only the Oeedah brothers can lead the charge against them.

The ideas behind Send Me are fascinating (e.g. a parallel, divine world gone rogue) but don’t feel well-considered. For example, the Omens are generic villains seemingly ripe for guilt-free slaughter, but the Escatons are innocent human souls who are also sacrificed as necessary. This would appear to contradict the Oeedah’s moral code, which denounces murder. Additionally, some plot points just don’t add up. For example, angels can appear on Earth to the Oeedahs, but have to borrow human bodies to stay and defend Earth against Omens. (The reason given is that otherwise they would disrupt human free will, but it’s unclear why this is so.)

Send Me is mostly written as Mark’s firsthand account, but with so much happening to his brothers and the angels, the author constantly has to inform readers of events secondhand. Whole chapters appear in italics as Mark tells readers what the angels just told him, which feels stale and passive. Late in the novel, Di Matteo switches to another Oeedah brother to narrate, but he sounds exactly like Mark. In fact, all the characters sound much the same—overly formal and oddly antiquated.

Send Me has high concept ideas and epic battles. Unfortunately, it lacks the thoughtful design and rich writing that it needs to make the novel a truly satisfying experience.