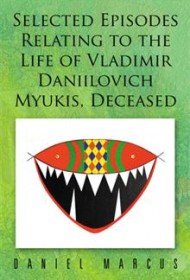 Snapshot chapters depict key moments in Volodya’s life, beginning with his expatriate years working in a kosher deli in Brooklyn, then flashing back to his experiences in the Soviet Union. Orphaned during World War II, Volodya was a teenage member of a street gang when he was arrested for drawing graffiti in 1951. His ability to copy documents landed him a job in the art department of the KGB, though he remained a typical Soviet citizen with no ideology other than getting by in a crazy world.

The author apparently shares his protagonist’s cynicism about all governments: Volodya emigrates not to find liberty, but because his pension disappears following the collapse of the Soviet Union; a blackly comic U.S. episode shows a pregnant Hindu immigrant from Pakistan being “extraordinarily rendered” following 9/11 and never heard from again.

The author’s primary target, however, is evident in the chapters depicting “The Association of Disenfranchised Artists of South Brooklyn, New York,” an equally cranky group of dissident artists in Lenigrad, and a crackpot gallery owner in the Catskills. These are quite amusing, as is the wincingly funny moment when Volodya learns that his first-ever sale of art was to a group of hunters who used his realistic paintings of wildlife for target practice.

Marcus nicely mimics the deadpan tone of Russian satire, though this approach makes the characterizations rather flat. The author’s intelligence and ambition are not particularly well served by his clunky prose, which makes slow going of humor that should be fast on its feet.

This is slightly heavy-handed entertainment most suitable for readers with a taste for broad satire.