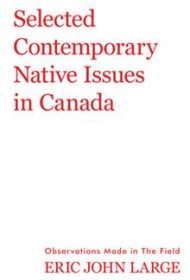 Eric John Large, author of the intriguing Selected Contemporary Native Issues in Canada, is a former chief of the Saddle Lake Cree nation with an impressive record of service to his people. His book is an assortment of pieces regarding Canada’s aborigines, including appendixes, statements, press conferences and memoranda written or released by Large during his public career, as well as five short chapters of original prose.

Those five chapters (a total of 25 pages) yield little that is new for the specialist: the Canadian government has not lived up to the terms of the Treaty of Fort Pitt (Treaty No. 6, 1876); the pro-native decisions of the Canadian Supreme Court have largely been ignored by the federal government; and there must be an attempt to clarify the issue of land ownership. But Large contributes to a vibrant debate when he criticizes the Canadian government’s position toward natives like himself, who lived through the Indian Residential School experience.

To Large and many scholars who studied the American residential movement in places such as Carlisle, Pennsylvania, the crusade that took native children out of their homes and sent them to boarding schools for education in the ways of white culture had tragic consequences: native language often was discarded for English; students were punished for acting or dressing in native manner; and there were many documented cases of abuse. Large uses his book to join the many natives who, as “alumni” of this program, are demanding restitution from the Canadian government.

Thus, this book is a mixed bag. If readers wish to work their way through a great deal of information, they will find a nugget of true consequence, as the author speaks out with the voice of experience against one of North America’s most troublesome chapters.