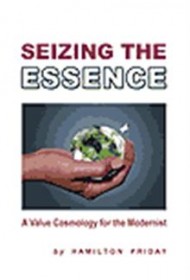 Is our view of the world simply a product of heredity and environment? Or do our values and worldviews have another, transcendent source?

Hamilton Priday posits an uncreated, undifferentiated “Essence” that secures the independent character of each human being’s value judgments. He puts the autonomous human being, and his or her unalienable experience of the world, at the center of his philosophy. It is our ability to evaluate, which the author connects with our emotions more than our intellections, which is the basis of his view of existence. He calls this philosophy “Essentialism,” although his use of the term should not be confused with the sense in which it is employed in other contexts, for example in feminist discourse.

Unfortunately, Priday’s terms are ill-defined. He alludes to John Searle and to Logical Positivism, but he could have benefited from further explorations in the Analytic tradition of modern philosophy, with it emphasis on small problems, well-defined, carefully considered, and closely argued. There are also glaring errors in detail. For example, he attributes George Bernard Shaw’s Man and Superman, to Nietzsche, whose name he misspells consistently. One or two such errors are forgivable from any author, but their accumulation here creates an air of amateurism.

His few forays into current events suggest that his philosophy is in the service of a rather conventional Americanism, a world of “rugged individuals,” where “freedom” is understood as the lack of dependence or constraint. Although Priday critiques Ayn Rand’s philosophy, the upshot of his Essentialism is a kinder, gentler version of Rand’s Objectivism, leavened with Neo-Platonic speculation.

Readers seeking an antidote to reductionist Materialism, and a defense of the Subjective, would be better off reading Thomas Nagel. Priday’s work generates sparks of insight but ultimately his arguments remain too opaque to justify his sweeping conclusions.