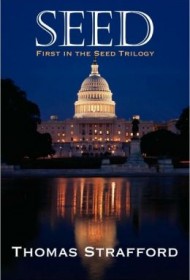 Author Thomas Strafford builds something of a puzzle within a puzzle in this Da Vinci Code-inspired extremist adventure novel.

Caleb Wentworth is a history teacher at an elite prep school in New Hampshire. He and his wife and three children live on a generations-old family homestead. Despite his Puritan roots, Wentworth is a deeply fanatical evangelical Christian, a fact that forms the core of the novel.

While trying to upend a tree stump in his backyard, Caleb discovers a secret passage leading to a sacrificial chamber containing a previously unknown prequel to the legendary “Domesday Book,” a public record that originated with William the Conqueror. The book ties America’s greatest leaders to witchcraft and reveals that the roots of European ancestry can be traced back to Abraham. “Most Americans have been duped into believing that our nation was founded on Christian principles by Christian men. Unfortunately, that’s the farthest thing from the truth,” Caleb tells his daughter.

Caleb faces many adversaries in his self-imposed mission to save the world from the Antichrist, including Sloman Wornband, the honorary mayor of Exeter, who covets the book, and Willy Klisc, aka Frank Bacon, a member of a secret society with an evil agenda.

Readers should be forewarned: anyone who isn’t a conservative evangelical Christian will find much that offends here. The novel’s radical political agenda is wildly racist, e.g. “No wonder the German’s [sic] had tried to destroy the Jews during the Holocaust,” and ignorant of the most basic tenants of science. The illustrious Domesday prequel disproves evolution and “Darwin’s hogwash,” while Caleb seeks out “someone or some group accessing great demonic power from abortion sacrifices.” For mainstream readers, this book is too offensive to be controversial and too absurd to be entertaining.

A historical footnote regarding the author’s name: Thomas Wentworth was famously the English statesman whose execution at the hands of Charles I led to the Irish rebellion of 1641. His title? Earl of Strafford.