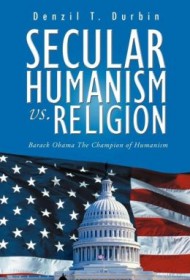 A product of the 2012 political season, this book is an attack on the Obama administration by a self-identified fundamentalist Christian. Its Manichean outlook posits perennial warfare between fundamentalism and humanism, the former uniformly good, the latter monolithically sinister. Author Denzil T. Durbin portrays Obama as humanism’s champion.

This book’s fatal flaw is its failure to distinguish fact from opinion. For instance, Durbin posits that the president has “lost the friendship of our allies.” One who wished to make this case might site polls from friendly countries, statements of allied leaders, or evidence of strained diplomatic relations. Durbin simply states his opinion as fact, disregarding evidence.

The facts he cites are often incorrect. For example, he has the ancient Greek thinker Protagoras living in the 12th century and Voltaire visiting the USA at its founding. The numbered references in the text do not correlate with the notes in the appendix, making it impossible to verify the sources of these “facts.”

He also conflates categories, for example equating humanism with Communism. Anyone he deems a humanist becomes a virtual accomplice in Soviet atrocities. He makes no provision for cases that contradict this conflation, for example Hong Kong, which is both widely secular and ardently capitalist.

Durbin also contradicts himself. He first claims that Islam is incompatible with humanism. Having tied humanism to Marxism, he then asserts that Obama is both a Muslim and a Marxist. How the president reconciles an atheist, materialist philosophy with a theistic, revealed religion remains obscure.

This book epitomizes a worldview in which “reason” is a term of opprobrium and which exalts a literal reading of the Bible. In such a world, opinions become facts and self-contradiction is inconsequential. Even within the discourse of fundamentalism, Durbin offers no new synthesis, merely assorted clichés from cable news.