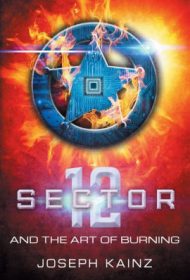 Joseph Kainz’s action-packed Sector 12 and The Art of Burning continues his acclaimed series of tongue-in-cheek military science fiction featuring Rev (previously known as Rab), a Frontier Corps Ranger up against a clandestine paramilitary force bent on the annihilation of soldiers like himself.

In the wake of the destruction wrought in Kainz’s previous Sector 12 and the Art of Dying, most Rangers have gone into hiding, but that’s just not Rev’s style; never one to shy from danger, he embarks on a mission to uncover the orchestrators of the anti-Frontier Corps plot and take the fight to their front door.

As Sector 12’s narrator and protagonist, Rev is portrayed as a likeable rogue—reckless in the service of what’s right and eager to challenge conventions, even to the point of butting up against (though not quite breaking) the fourth wall separating him from the reader. His storytelling is reminiscent of action movie voice overs: sarcastic, self-deprecating, and filled with hilarious digressions, striking a tone somewhere between Harry Dresden and Deadpool.

Many chapters begin in media res, with Rev meandering backwards to set up the events unfolding, which helps ratchet up tension but also serves to disguise an arguably thin plot: Rev seeks information on a generic enemy, engages in tangentially-related misadventures to obtain it, but delays the real confrontation for a future volume.

While this may slightly diminish enjoyment for new readers of the author’s work, it won’t detract from the enjoyment for fans of Kainz’s irreverent and intrepid hero. For anyone craving military science fiction that doesn’t take itself too seriously, Sector 12 And The Art of Burning is a welcome addition to an entertaining series from an author happily in his element.