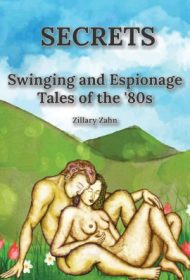 In this “fictionalized account of real events,” author Zillary Zahn shares the experiences of several characters who reportedly participated in sex parties arranged by the government during the 1980s Cold War. The author notes that all the names of participants have been changed, including his own, but that the facts remain true.

The story begins with Zahn’s interview of a woman who recounts her first swing party at an exclusive ranch in the San Francisco suburbs. She describes the rules/etiquette of the party and her slow shedding of her inhibitions. This is followed by Zahn and other characters describing their own experiences at similar events.

At one party, Zahn and his friend Naomi meet Lorraine and Mitchell Hester, a wealthy couple in the high-tech industry who travel internationally hosting swing parties. They invite Zahn and Naomi to travel with them. In time, the beautiful Naomi is offered a modeling job for more money than she can decline and is replaced by another woman. Other characters are suspicious of Naomi’s modeling offer, providing the first indication that not all is as it seems and foreshadowing a later Cold War plot twist.

The author writes that the stories are based on government files for the most part no longer classified, as well as diary entries. Despite the sexy subject matter, this often makes for dry reading. The characters, generally beautiful, intelligent and well off, aren’t particularly relatable. The sex is often flatly described; for example, a hot tub filled with aroused partiers is “interesting.” When more detailed, sex scenes can lapse into the overwrought, as when one person observing another couple notes: “I can almost taste those velvety vaginal lips and her warm juicy delicacy as he buries his mouth between her legs.”

The underlying mystery is who these characters are and what their true purpose is. It turns out to be a clever tale, but getting to that reveal may be a slog for some readers.