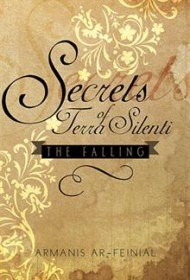 Creating a fantastical literary universe full of its own mythos, races, languages, and history, is a complex undertaking— one that proves challenging for the author of Secrets of Terra Silenti: The Falling.

The story begins with some promise. In the Time of Great Trials, the forces of good defeated Decrepantaur and his seven powerful servants. However, years later, the servant Fakino returns as a spirit who possesses a woman’s body. She breathes life into the dead at Terra Silenti to build an army that will help Decrepantaur rise again. Meanwhile Kac, an elf who has fled his home of Kinasa, wanders into Terra Silenti and falls ill upon witnessing the horrors there.

At this point, the storyline gets cloudy. Fakino spends the rest of the novel relentlessly pursuing Kac and killing all who stand in her way, but there seem to be other evil forces at work, as well. These include bands of orcs, a black knight, and potentially a serpent that may be much more powerful than Decrepantaur, but it’s not clear whether these entities are working together or independently.

Flawed plot and character logic prove jarring.  For example, “This is indeed an interesting adventure!” Erdan the elf exclaims soon after he and his traveling partners experience a near-death encounter with Fakino. Well-drawn characters would be more distraught at their circumstances and the prospect of evil arising in their lands again. Additionally, many characters appear to exist solely for the sake of moving plot forward, some leaving the pages as quickly as they enter.

The book is peppered with typos, sentence fragments, incorrect word usage (“through” instead of “threw,” “void of” rather than “devoid of”), capitalization inconsistencies, misspellings, and even character name errors (calling the God of Creation “Unverdus” then “Unversdus”).

While the storyline is inventive, Secrets of Terra Silenti draws upon established fantasy stories that are much more coherent and better executed. As such, it is unlikely to attract a wide audience.