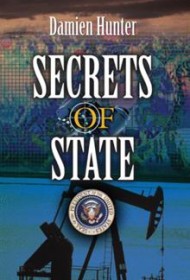 Author Damien Hunter knows a little something about covert operations and global politics. His very brief bio in Secrets of State suggests as much, noting that he’s “a lawyer, former aide to two Members of Congress, and one-time target of a CIA recruitment effort.”

The proof is in the pudding, as this narrative is packed with particulars about spy games, from armaments and tactics to backroom plots involving characters with global corporate interests and high-level connections in the U.S. government. It’s all played out against the story of two government operatives, Jeigh Leighton and Paula Grant, fighting to survive after Leighton is ordered to assassinate a drug lord.

It’s no spoiler to note that the pair’s main adversaries turn out to be their own leaders; in the tradition of Robert Ludlum or John le Carré, that’s standard fare for this genre. And while being derivative isn’t always a bad thing, Secrets of State doesn’t really dig into fresh territory in an intriguing way.

The book puts a lot out there in the opening pages, delivering an exposition wave that could have waited until the reader got a better feel for Leighton’s character. That opening assassination sequence should swell with suspense, but it takes on a too-clinical tone.

The writing, while clean and technically sound, fails to make Leighton or Grant especially engaging. Action sequences swell with detail but lack the kind of propulsive force these tales demand. The finer points are often intriguing — one can believe that the decisions and actions are true to real life. But this spy thriller, while heavy on spy, ends up being too light on thriller.