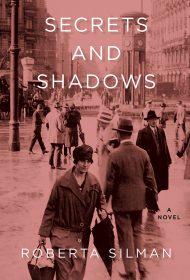 This powerful, deftly plotted novel shows how the past can intrude on the present, often tormenting the lives of those who struggle to escape its grip.

Pauli Berger, a Jewish youth in Nazi-ruled Berlin, spent most of the war hidden with his family in the attic of a sympathetic gentile. Now, in 1989, he’s a successful lawyer who calls himself Paul Bertram. Learning that the Wall between East and West Berlin has just fallen, he’s determined to return to that city and confront unresolved issues from when he was Pauli.

Strangely, he asks his ex-wife to accompany him, although he knows that for Eve, it won’t be an easy decision. Their marriage was difficult, as he had adulterous affairs and has kept the details of his early years securely locked away from her. But she finally agrees, perhaps as much to fill gaps in her own life as in his.

Once in Berlin, Pauli’s past catches up with Paul’s present and Eve discovers things about her former husband that she may have only vaguely suspected. Flashbacks and Paul’s explanations reveal to her a time when guilt and danger fouled the atmosphere.

The author, who has written several previous novels and whose work has appeared in The Atlantic and The New Yorker and elsewhere, weaves her themes—memory, history, trauma, marriage—together seamlessly. As the narrative explores Paul and Eve’s struggles, it offers a subtle cultural backdrop, with intriguing references to the tormented work of expressionist artist Kathe Kollwitz, the equally tormented poetry of Paul Celan and the music of Mozart, Bach, Beethoven and Sibelius. The mentions appear in various scenes—for example, in one passage the young woman sheltering Pauli’s family in 1944 plays a Beethoven sonata— and combine to suggest wider meaning to the story.

Secrets & Shadows offers superbly crafted portraits of time and place and sharply edged characterizations. As the story unfolds, readers will find it a provocative and haunting experience.