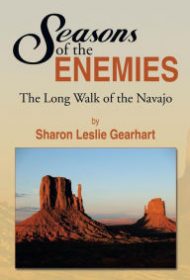 The near-genocidal campaign against the Navajo nation from the 1850s through the Civil War is rarely approached in modern fiction. Sharon Leslie Gearhart’s compelling Seasons of the Enemies focuses on the Navajo tribe, the Dineh, who lived in the northern halves of New Mexico and Arizona.

Seasons is based on stellar research. As hogans are built, crops planted, and game hunted, Gearhart offers glimpses of the Navajo’s creation story, daily diet, courtship and marriage rituals. There are also nuanced portraits of tribal leaders such as the belligerent Manuelito and peace-seeking Zacarillos Largos.

Focused on Strong Horse Man through much of the story, the narrative grows more generalized as the Navajo resistance to their oppression collapses. It’s written in a reportorial style, but Gearhart’s knowledge and passion means interesting facts appear on every page. Navajo characters are treated empathetically, and in an era when ugly bigotry ruled, the author recognizes those few whites who had compassion for Native Americans.

Minor troubles with dialogue include an army colonel’s slave’s dialect, which might offend some. Another character’s speech is sometimes anachronistic. But Gearhart, a long-time Navajo country resident, is spot-on with settings. The land, from piñon nut to antelope to Black Mesa’s rocky slopes, comes alive on the page.

Considering its rarely fictionalized subject, Seasons will be an excellent addition to the libraries of those fascinated with the western expansion.