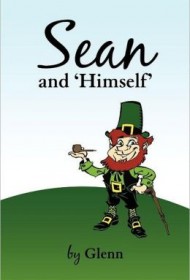 Sean and ‘Himself,’ by Glenn (no full name given), is a collection of interrelated Irish tales about a good-natured slacker and tippler named Sean, and an eight-inch tall leprechaun.

Sean only turns his hand to work when his wife compels him and spends most of his time loafing about with mythical creatures, the wee folk, and Himself, the leprechaun. Because he is perpetually low on funds, Sean trades tales of his encounters with the fay for drinks at his local pub.

Many of Sean’s tales involve his attempts to wrest from the leprechaun his legendary pot of gold. Others provide explanations for phenomenon such as Ireland’s Giant’s Causeway and the image of the face on the moon. The characters in these narratives are archetypical: the leprechaun is a trickster; Sean is a wise fool; and the fairies mainly dance a lot. A large portion of the stories end with a moral.

What Glenn gets right with these tales is the lilting Irish storytelling vernacular, with its rhythm, unique phrases, and arch manner of putting things. Many of these stories would be best read out loud to catch their musicality.

Aside from their lyricism, however, the stories in this slender book are problematical in that they aren’t constructed to reach a particular audience. Because the characters are archetypical and lack depth, they aren’t likely to hold an adult’s attention; the typical adult reader can only peruse so many tales about clever leprechauns and well-meaning buffoons before his or her attention starts to wander.

On the other hand, even with their well-placed morals, the stories seem inappropriate for children. It’s hard to imagine a parent who would be comfortable exposing a child to a character so frequently inebriated.

Consequently, although this collection may find some appeal with fans of Celtic lore, it is not likely to garner a larger audience.