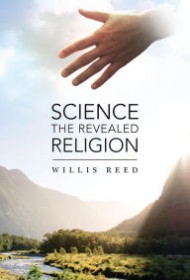 Can the struggle between religion and science ever be reconciled? According to author Willis Reed the answer is yes. In his short book, Science the Revealed Religion, the engineer and World War II veteran offers a way to better understand all of creation by exploring “an existing unknown method God chose to communicate with humankind, based on scientific principles.” For the author, that method is mathematics. “If,” Willis writes, “mathematics tells us that a theory is true, it follows that God revealed to us that it is true. Mathematics is not the word of God, but it certainly reveals a message from God to man.” Essentially, Willis seems to be arguing, God gave us mathematics as evidence that an objective reality exists.

Presented in Q&A format, Science the Revealed Religion asks such questions as: Where is God? What is the Soul? What existed before creation? Is it possible for us to describe what heaven is like? Through a relatively light use of math, the author’s brief, philosophical answers draw from the wells of cosmology, physics, quantum mechanics, string theory and scientific and theological pursuits. For example, he uses a basic form of the Lorentz transformation to demonstrate that time does not exist but is a construct of our own minds.

Willis’ observations are interesting and thought-provoking, although the idea of using mathematics to prove the existence of God is not new (Plato, for example, used mathematics to help support his theory of Forms). And while well-intended, the book can feel incomplete. The author tackles a lot of big topics in a scant 33 pages, which means that his explanations only scratch the surface of his subjects’ complexity. Readers looking for depth will want to look elsewhere.

Nonetheless, despite its brevity, the book offers ideas that will stir conversation, and church groups looking for a primer to discuss faith and reason will find a number of talking points here.