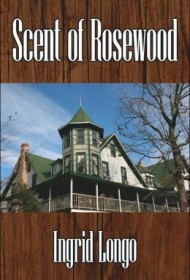 Scent of Rosewood is an ambitious novel with a hint of the supernatural about a woman healing from trauma with some unexpected help.

Young marrieds Emma and Danny have moved to North Carolina to stay with his mother while Danny completes his medical residency. Emma used to be a psychiatric nurse, but an assault she suffered on the job has reduced her to a quivering mass of insurmountable phobias. In their new home, she makes friends and begins to reawaken and reconnect. But there’s danger afoot; when the chips are down, will Emma be able to take control?

Author Ingrid Longo has plotted this book nicely, with one exception: a scene when Emma is in danger that goes on for 60 pages. Her would-be assailant seems to be trying to filibuster her to death. In addition, there are a few unusual word choices that stick out, such as when a patient escapes from the hospital Danny’s working at and is described as having “eloped”; the escape is then referred to as an “elopement.” While not an unforgivable problem, such moments distract from the story.

Longo’s cast of characters includes Danny’s mother, who ventures out with a group of doctors to treat victims of Hurricane Katrina. This welcome touch gives the story a rich background.

Scent of Rosewood is compelling, if imperfect. With some careful editing to clean up the writing and tighten the plot, it could give Anita Shreve a run for her money. As is, readers who appreciate a big story with some thrills and romance will likely enjoy Longo’s novel.