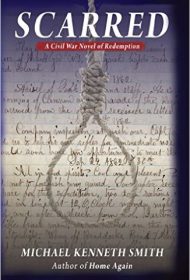 In 1908, young New York World reporter Chris Martin needs a prize-winning feature story. Martin finds one when he discovers Zach Harkin, a reclusive Tennessee gunsmith who was a heroic Union sharpshooter during the Civil War.

Visiting Tennessee, Martin learns Harkin suffers from what’s now characterized as post-traumatic stress disorder and has never spoken of his experiences. As Martin persuades him to talk, readers learn that following the Battle of Gettysburg, Harkin killed a rebel soldier named Jack Kavendish. The bloody death fractured Harkin’s soul; emotionally damaged, he was discharged. Back home and obsessed with making amends, he sets out to find Kavendish’s wife, only to be captured by a Confederate patrol and eventually sent to Andersonville Prison.

The early scenes of Martin persuading Harkin to talk seem rushed, but they are still credible and provide a solid foundation for Harkin’s adventures, which are conveyed in flashbacks. The descriptions of rural southern life as the war burns to embers are superb, with hardships and deprivations realistically woven into the narrative. Growing in intensity, Smith’s narrative follows deserters and murderous guerrilla bands as they raid, rape, and rob struggling farmers and war-weary townsmen. Despite no set-piece battles, these action scenes bleed with reality, and the descriptions of Andersonville are so realistic that many will cringe at what Union prisoners were forced to endure.

Harkin is a vibrant protagonist who grows increasingly sympathetic throughout. Meanwhile, Scarred’s pace is nearly cinematic, every action scene ripping with desperate man-to-man violence. This, however, isn’t a war novel; it’s the story of Harkin’s quest for redemption and closure.

Historical fiction and Civil War buffs will wish Scarred were closer to the epic length of Gone with the Wind, simply because the subject never grows tiresome. But both will find Smith’s  solidly written novel an engrossing, moving read.