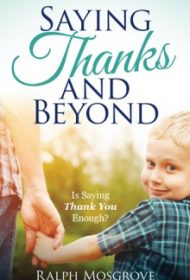 When was the last time someone held a door for you? How did you react? In Saying Thanks and Beyond, author Ralph Mosgrove asks readers to consider taking their gratitude to new levels and creating more of it in others. It’s a very short book, but the message is welcome and cheering.

In crisp, straightforward prose, Mosgrove describes caring for his late wife after a fall restricted her to using a walker. With her slower pace and bulky wheels, he became acutely aware of who would hold a door or make space versus those who huffed if they felt crowded by her presence. Reflecting on this after her death, he suggests to readers, in his initial pages, that they slow down to allow time for kindness.

After that brief introduction, Mosgrove outlines ways to be kind in six chapters. For example, “Hands and Feet” suggests maintaining open and friendly body language. “It’s Better to Give Than Receive” advises leading with generosity instead of the expectation of gain.

His supporting examples can be simple and on-point, as with a woman who spies an older man struggling with heavy groceries and gently carries them to his car; others, less so —such as the story of a man who considers firing his incompetent chauffeur but instead pays for further training and buys a more comfortable car for the man. This seems to ask an awful lot of someone with an unqualified employee.

At just 37 pages—and with plentiful blank space between chapters—this is a brisk read indeed. More detail about Mosgrove’s married life, or even life after his wife’s passing, would have offered real-world examples of gratitude in action and given the book more heft.

That being said, Saying Thanks and Beyond is still an inspiring story that may provide just the boost someone needs on a down day.