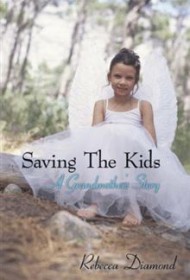 Author Rebecca Diamond spent most of 2008 fighting her drug-addicted daughter Tracey and her abusive son-in-law for custody of her two grandchildren, then 4 and 7. When she told her gynecologist her story, the doctor, like others, told Diamond she ought to write a book. So Diamond used her journal entries to create this record of events “as a way of trying to understand our family’s circumstances and help myself deal with them.”

The book moves briskly, tracing the familiar story of addiction and its fallout: Tracey’s rehabs and relapses; her unfulfilled promises to leave the sociopathic husband she fears; her lying and theft (even from her kids’ piggybanks), and, subsequently, her neglected children.

Diamond devotes most of the ink, however, to Sean, the “tall and good looking” man Tracey met at a Narcotics Anonymous meeting after the birth of her son Jacob and then married before giving birth to daughter Lindsey. Variously referred to as a “nutcase,” “bad seed” and “sick ticket,” Sean increasingly terrorizes the Diamonds with threats, harassing phone calls and false police reports as access to the children is curtailed.

Diamond lashes out at the legal system’s inability to protect her and her family. “Where was all of his initial bravado when it really counted to keep that bastard locked up? I was changing my mind about Officer O’Brien,” she writes. “I sure was learning a lot about our so-called justice system.”

Families of addicts will certainly relate to the story and cheer the apparent well-being of the children, who are fortunate to have landed in a stable home with grandparents who are providing them counseling. They won’t, however, find practical suggestions for those in similar situations, or perspective on the larger issues. While it doesn’t offer much reflection or insight for readers to take away, Saving the Kids is nonetheless a cathartic and well-written recitation of events surrounding an unjust and frustrating situation.