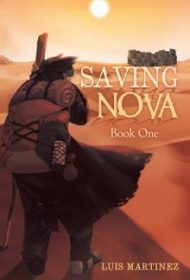 There’s much to like in Luis Martinez’s apocalyptic science fiction novel about a young man chosen to embark on a mission into a dangerous desert to save his village, Nova, from starvation.

In this story, nuclear war has devastated the earth, and in the deep desert a new species that has replaced humans at the top of the food chain lies in wait for the unwary: the “mimic,” a malignant, lion-like animal with a taste for human blood that can make itself nearly invisible and imitate human voices, calling its intended victims to their deaths.

Eighteen-year-old Sean Anders is an unwilling hero who pushes on deep into the unknown, in what he feels is a hopeless search for another human habitation where his people can find food and safety. What he finds is a vicious world of scorpions, sand storms, bandits, and—mimics.  Driven by visions of relatives and friends, he pushes beyond his endurance, into this fractured world where fear and mayhem rule, until he comes upon what he dared not expect: a human settlement.

In this well constructed first novel, Martinez begins at the end, then re-rolls events leading up to that ending. Because we know the conclusion, the author faces a challenge maintaining engagement—and succeeds admirably. Except for several places where the story is predictable—the dream of, and memories of his dead father, the scorpion crawling on him, the sandstorm, and a few others— he maintains a steadily building tempo.

With its strong sense of character, excellent world building, and many plot twists and turns, Saving Nova should satisfy any science fiction fan.