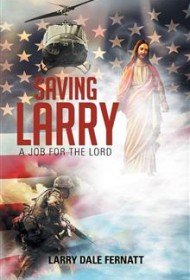 Saving Larry: A Job for the Lord tackles several of author Larry Dale Fernatt’s life stories in one slim memoir and includes the recounting of Fernatt’s service in Vietnam and subsequent post-traumatic stress.

Fernatt dropped out of school to join the Marines in 1958, and describes the culture shock of basic training in vivid detail. Ex-military will recognize his reference to “SOS” (chipped beef on toast, or “sh*t on a shingle”) but others may be left in the dark.

After the Marines, Fernatt joined the Army and was severely injured while serving in Vietnam. He finds twisted humor in the story of his injury: Crushed under a building hit by a grenade, his life is saved by a refrigerator full of Vietnamese beer that falls on him. The nurse who aspirates his lungs with a needle is mystified when beer comes out.

Fernatt writes well about his experiences, but at just 45 pages he attempts to tell four stories simultaneously. There’s the story of his service career and the subsequent PTSD; accounts of his civilian jobs, including stints in coal mining and the post office; stories of his eventual conversion to Christianity (which is cemented while he’s in jail); and the fact that at age 73 he has been convicted of molesting a family member and sentenced to a minimum of 20 years in prison.

With so many different avenues explored in so few pages, the book is likely to lead to more questions than it answers. And if the author can be commended for his honesty, it also must be noted that he toggles between accepting responsibility for his actions and making some truly appalling excuses.

It’s unclear exactly what the intended effect of Saving Larry is, but it ultimately leaves readers with some very uncomfortable material to sift through in addition to a thoughtful war story.