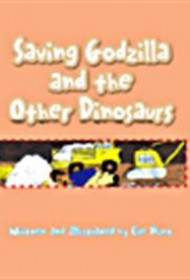 Edward lives in a house with his Mom, Dad, twin sister Elizabeth and his dog Brazier. His best buddies include B.J., Carlos and the level-headed Vontae. The boys ride the bus together to school. After school, they play with Godzilla and Edward’s other dinosaur toys, creating make-believe adventures about battling beasts and erupting volcanoes.

When construction work begins at a site across from Edward’s house, the boys can’t resist playing there. One afternoon when they are called home, they bury their toys, hoping to begin again the next day. But the next morning, the construction site is a hub of activity: the kids watch the construction vehicles, and workers are everywhere. How are the boys going to rescue their dinosaurs? Why aren’t the toys where they left them? And what exactly is the huge, mysterious bone that Brazier has dragged into the garage?

Hunt’s story is engaging, but the book suffers from weak design choices. The illustrations are rather amateur (though bright and good natured). The text is too long for a traditional 24-page picture-book format, which this appears to be (even though it is also separated into chapters); this should be a longer, more standard chapter book. Finally, the type is difficult to read.

One hopes the likable Edward’s next adventure makes the mystery the focus of the narrative, as opposed to description and backstory: in this introductory tale, the adventure seems to take a long time to start cooking. Despite the design and pacing issues, reluctant readers who love dinosaurs and a mystery will find much to like in this tale.