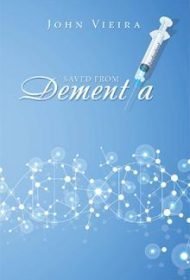 John Vieira is a man searching for his place in the world and the religious truth that accompanies it.

Part autobiography, part religious tract, Saved From Dementia takes readers on a confusing journey as the author struggles to convey what he’s trying to say. Long passages are unfocused, repetitive and rambling; religious references add little to the narrative, at times only further muddling the story.

If there’s a thread to be followed here, it’s the trauma he believes he has suffered because of his name. He was born in Guyana as John Omar Vieira, but shortly after his birth his parents and siblings moved to London, leaving him in the care of his mother’s extended Muslim family.

Her family used his Muslim name, “Omar” (or “Umar”), instead of the European “John.” Vieira believes use of that name caused him a lifetime of trouble: discrimination, expulsion from school, brushes with the law, opportunities denied and finally a diagnosis of mental illness. The issue comes up in every chapter, repeatedly. Sometimes it’s the subject of extended expositions; sometimes it just pops up: “Laurel and Hardy and Bob Hope movies were fantastic,” he writes of his childhood, “and I also remember coming home from secondary school to watch Elvis albeit everyone called me Omar/Umar.” And later: “my parents were unsupportive and discouraging and everybody insisted on calling me Omar …” This obsession feels like the foundation of the narrative, but it’s difficult to be sure.

The book seems to have been written for Vieira himself and his effort to exorcise the demons that have tormented him. From that perspective, if Saved From Dementia helps him right his ship and find peace, then it was worth the effort. But general readers will find Saved From Dementia a challenging read at best.