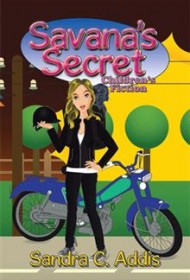 Savana’s Secret is a tale aimed at children under 12. It follows the story of a young woman on the run from an ambiguously dangerous organization.

When high school student Savana is chased by some boys of ill repute, she learns she has the ability to fly. In an accident apparently unrelated to other events in the book, her parents are killed in a car crash not long after. While going through their files, she discovers that she was adopted—and that her biological parents knew about her ability to fly and left instructions for how to stay safe despite the threat from ISWIT, an organization that apparently means her harm (although there’s no satisfactory explanation for this animosity).

Despite a central mystery, the book’s scattered plot and weak conclusion are unfulfilling. While author Sandra Addis attempts to create a complex web of intrigue to overlay our modern world, her story’s unexplained antagonists and tenuous character motivations prevent the story from being compelling or cohesive.

In addition, the book is labeled “Children’s Fiction” on the front cover, but features age-inappropriate scenes, including when boys try to tempt Savana out of hiding with cocaine. Mentions of violence, drugs, and other adult themes make it far more mature than its intended middle-grade audience, even for precocious readers.

Although perhaps an interesting concept, poor execution and a failure to recognize its audience’s needs will likely prevent Savana’s Secret from building a wide audience of young readers.