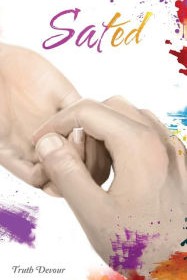 Truth Devour’s Sated is the final installment of the author’s romantic trilogy featuring Talia Jacobs—a woman who has spent the majority of her adult life on a spiritual quest to find her soul mate.

The novel begins with Talia finally meeting the yin to her yang, a man who was Talia’s childhood friend decades ago when she lived in Haiti and before her parents were killed. The deep connection that Talia shared with Bodhi remains after all of those years—in fact, he has been looking for her for decades! But will the pressure of being a “perfect match” for each other be too much for them to sustain?

Talia’s revelatory journey is ultimately about self-discovery, and that is easily the most powerful aspect of the story. Her life lessons—absolution, unconditional love, etc.— overshadow the plot thread concerning her relationship with Bodhi.

Additionally, as sublime as the sex scenes were in the first book, such encounters here aren’t nearly as well written, and some might even be considered cringe worthy. In one scene, as Bodhi and Talia approach climax during love making, he pulls out of her and releases “his juices of satisfaction” onto Talia’s abdomen.

Ultimately, it’s the weak characterization and a sadly predictable ending that make this a disappointing concluding volume—especially considering the power and potential of the first installment.