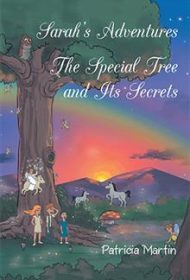 In Patricia Martin’s debut children’s story, a seven-year-old girl visits her aunt and discovers a magical tree in her garden.

An only child who lost her mother when she was young, Sarah eagerly looks forward to her visits with her kind Aunt Floss, her mother’s older sister. One morning, Sarah sets out to explore the garden when a large tree suddenly appears before her. Venturing inside the trunk, she looks up to see “little sparkles” near the top and muses that they could be fairies. Then she meets Kevin, a neighbor boy who joins her the next day, as they venture to the top of the tree.

The story follows the two children on their day-long upward journey as they meet a menagerie of creatures, including elves, butterflies, bees, a snail, a menacing spider and a bevy of giggling fairies that they spot in the tree knots.

While the narrative has much potential, the author unfortunately offers little character development, resulting in a thin, linear plot. It also suffers from an overuse of exclamation points, which has the paradoxical effect of reducing the excitement.

Additionally, readers may be puzzled by some inconsistencies. For example, although Sarah was a mere three-years old when her mother died, the story reads that her mother “taught Sarah about the true meaning of life.” Near the beginning of their upward adventure, Sarah loses a shoe, and perceptive readers might wonder how she spent nearly the entire challenging climb wearing one shoe.

Charming, animated black-and-white illustrations support the text. But as the story is chock-full of imagery such as rainbows and fairies, full color illustrations would be more effective.

With some revision to flesh out the characters and decrease the hype volume, this sweet story about magic, nature and perseverance could enchant the younger set. As it stands, young readers may wish for more.