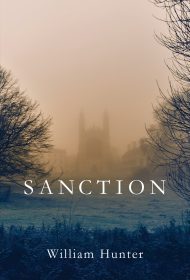 The tale begins in Cairo in the wake of WWII, where a radical arm of the Muslim Brotherhood makes a pact with Nazi covert operatives. Next, we flash forward to London circa 2014, where a terrorist explosion tears through London’s King’s Cross railway station; then we find ourselves, two years later, in Cambridge for a memorable encounter between our hero and his nemesis.

Our hero is Sean Garrett, a former Royal Navy commando. He’s been sent here on behalf of MI6 section head Banastre Montjoy to retrieve some vital intel from respected academic Mohammad Ahmad. But Garrett believes Ahmad was a player in the terrorist bombing that killed his grandfather and crippled his sister and is strongly considering executing the man.

When assassin David Laurent beats Garrett to the punch, it leaves Garrett the only witness to a murder that attracts the attention of the British Secret Service, Scotland Yard, and America’s CIA. Much like Le Carré’s novels about George Smiley, this is a world of code names, passwords and other tradecraft, and it’s filled with fascinating characters like the burnout Montjoy, a rogue ex-CIA agent named John Campion, and a pair of capable CIA agents who are out of their element among these gentlemen spies.

It’s no easy feat to weave three plots—the cat-and-mouse game between Garrett and Laurent, the search for the bombing suspects, and the conspiracy behind Ahmad’s murder—into a single narrative, but Hunter pulls it off with style. For the first two thirds, readers may struggle to keep up with the plethora of acronyms, shifting allegiances and constant subterfuge, but they’ll also be rewarded with some startling reveals by the book’s end. Added to Hunter’s crisp prose, compelling characters and nimble plotting, this book is worth reading again for the sheer pleasure of the chase.