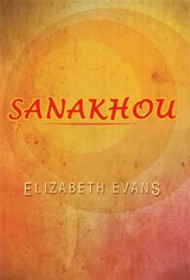 This historic fiction follows the drama of a tribal prince who must marry the reputedly deformed daughter of a powerful king because of a sacred pact, or sanakhou, designed to protect the prince’s village. Upon arriving to fulfill his duty, however, the prince and his faithful mentor realize they are unwelcome by some and face intrigue, theft, and murder that threaten to jeopardize the marriage and the safety of both kingdoms. Together they must race to determine who is behind it all, and why, before more than just the sanakhou is lost.

While the story is told through the eyes of multiple key characters (the prince, his mentor, the princess, the king, etc.), the pace is never lost. With captivating plot developments at every turn, author Elizabeth Evans weaves rich characters and story lines, transporting readers into the colorful scene of an Africa most know little about.

Although the tale is set in ancient times, the characters and dialogue feel fresh, including even the occasional comic relief of the prince’s mentor, who at one point exclaims with incredulity: “Blue balls of a hippopotamus.”

As mysteries go, Sanakhou offers just the right balance of complexity. Clues, including red herrings, interlace the storylines of each character so that readers know more than any one character but will still probably not figure it out until the end, when everything brilliantly comes to a head.

Several times the story switches between the thoughts of different characters without an obvious break, which feels abrupt and occasionally creates confusion. It would have been better to emphasize the transition with an extra space to alert readers to the change.

Despite such challenges, Evans delights with this tale, bringing ancient Africa to life and offering a beautifully crafted mystery that readers will enjoy trying to solve. In the prince’s words, “… we do like a good puzzle, do we not?” Yes, yes we do.