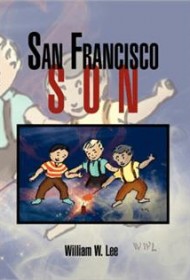 William W. Lee, born in 1923, decided a few years ago to set out his life story for his current family, including his three sons, as well as for future generations. Much, but not all, of his personal history revolves around the Chinatown section of San Francisco.

Lee’s parents represent countless others who arrived in the U.S. from another nation, adapting the best they could. His father worked as a cook for an Anglo family, while his mother reared six children, sewed clothes at home and sometimes in a nearby garment factory. Leaving San Francisco to serve in WWII, Lee trained as a construction engineer in Missouri, then shipped out to Europe to support combat troops behind battle lines. After the war, he returned to the San Francisco area, earned a college degree in chemistry and married a Chinese-American he had met before his military service.

Lee comes across as a nice human being, somebody readers would enjoy knowing. The nostalgia that soaks almost every chapter is touching. For example, in “Dad and I in Chinatown,” Lee recalls when he and his father would wander Chinatown streets, stopping for conversations, entering shops with poultry hanging in the windows. Sometimes, shopkeepers would offer young Lee a taste of the aromatic food.

Despite such endearing moments, general readers will find the story challenging, as the book lacks many elements of absorbing storytelling. The narrative is organized haphazardly, jumping around in time and place, which makes it hard to follow. Copyediting errors, including typos, poor comma usage and other punctuation problems, also detract from the book’s readability. The final two chapters are especially distracting, as they depart from the family theme to discuss nuclear weapons and water privatization in highly impersonal terms.

San Francisco Son will surely provide pleasant memories for Lee’s loved ones. Unfortunately, the book suffers too many flaws to make his life sing to strangers as well.