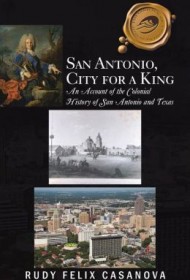 It sounds familiar: Not long after the Mayflower landed at Plymouth Rock, a ragged, road-weary band of colonists settles a tiny village that blossoms into a great city.

But this history is anything but familiar to most Americans. That village became modern-day San Antonio, Texas, America’s seventh largest city. And the colonists were 56 poor, desperate, rural folk from a far-flung Spanish archipelago known as the Canary Islands, seeking a new start.

Amateur historian Rudy Felix Casanova is a direct descendant of the original Canary Islands colonists who founded San Fernando de Bejar (now San Antonio) in 1731. This monograph is his affectionate attempt to shed light on an intrepid but overlooked group of 16 Spanish families whose saga might be compared—albeit modestly—to the Pilgrims.

Casanova’s thesis: Without established Spanish settlements in northern Mexico, American expats (known as Texians) likely wouldn’t have been invited to work the land in the 1800s. Without Texians and the descendants of original Spanish settlers (Tejanos), there would have been no civil unrest against the despotic Mexican government of strongman Antonio Lopez de Santa Anna. Without such a rebellion, there would be no Alamo to remember … and no Texas. (And maybe no chili con carne either, but that’s a different story.)

Nevertheless, Casanova doesn’t dwell on what-iffery. Instead, his account—only slightly longer than an encyclopedia entry–skims almost 300 years of history in 50 pages, a little too quickly for us to get intimately acquainted with any of these hardy souls.

Today, Casanova and many other descendants of the Canary Islands colonists still live in San Antonio. This narrative would have been more real (and memorable) if it had explored their forebears’ personal stories of fear, deprivation, and triumph on the way to making a new world. Nonetheless, what is offered in this slim narrative will interest and engage readers.