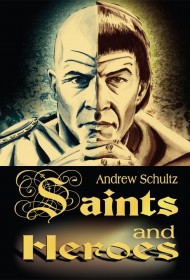 If J.R.R. Tolkien and William Shakespeare met in creative writing class, Saints and Heroes may have been their joint endeavor, as this story combines the fantasy of Tolkien with the medieval setting and language of a Shakespearian play.

Author Andrew Schultz craftily explores the trials and tribulations of Anselm, an 11-year-old boy who lives a decrepit monastic life with his drunken father and beloved pup. He often retreats to an imaginary world in which he tackles daring adventures, such as climbing mountains and conquering trolls.

Early on, he is whisked away from that life by Father Berengar, a prestigious Benedictine priest who takes control of the boy under the guise of schooling him for the ministry. Actually, Anselm has been slated to play an important role in both religion and history. And so begins a tale of hope and despair in 11th century Britain and Scotland.

Good and evil, truth and deception follow Anselm on his journey, taking place first in virtual solitude and later with the companionship of his friend King Malcolm (yes, from Shakespeare’s Macbeth) and his soul mate, Queen Margaret. Anselm must come to terms with the devastating choices he’s made and strive to become an upstanding man of the cloth.

The story weaves through medieval times, with the era’s religious history providing interesting fodder to the backstory. While the plot is somewhat predictable, carrying the conventional hero and villain theme, Schultz develops Anselm’s character from a carefree boy to a middle-aged man with sheer mastery; Anselm endears readers with each step of his struggle to become a man Berengar can be proud of.

The archaic and unfamiliar old English style is both difficult to digest at times and lyrical and poetic; Schultz writes with a rhythm and cadence that sounds beautiful to the ear. His unique tale is often hard to put down. Fans of coming-of-age and Celtic fantasy, as well as religious medieval literature will not be disappointed.