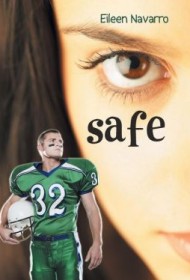 In the emotional romance Safe, Jayce and Alexa must face dark secrets, trust issues and abusive histories as they fall toward a love that they aren’t sure they are ready for.

Author Eileen Navarro catches the reader’s attention early by revealing a frightening scene from Alexa’s past: An altercation with her previous boyfriend leaves her bruised and battered, both physically and emotionally. Fast-forward to the present: Alexa is healing and considering moving on with her life, but the past still haunts her. At a club she meets the kind, handsome Jayce, a famous football player, and they share an instant connection. A tentative but hopeful romance ensues.

Navarro tells the story from both characters’ perspectives. Early on, Jayce and Alexa struggle to find their individual voices, often sounding so similar that it’s difficult to distinguish between them. But as the plot tumbles along and readers experience a sometimes sweet, often dark and angst-filled emotional roller coaster, the characters become more defined and forge a connection with the audience. Despite their issues, this is a couple to root for.

Safe isn’t without problems. There are many spelling and grammar mistakes, and the dialogue and first-person voices of the characters sometimes feel unnatural, as with this thought from Jayce: “Being without her for the past few days was tough and as I voiced missing her I sort of wondered if maybe there was something more between us.”

The characters remain relatable, however, and the tension and emotion are engaging. Alexa’s and Jayce’s friends add color and depth. A dramatic, open-ended conclusion leaves room for a sequel to explore not only Jayce and Alexa’s future but also that of the other characters.

Despite its flaws, Safe will appeal to readers who enjoy a warm romance with a dark edge and just a touch of steaminess.