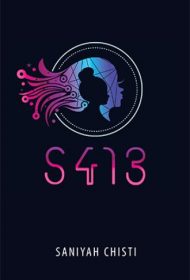 In S413, the female protagonist finds spiritual awakening with the help of a romantic interest.

Elizabeth Lawrence, a young, Indian-American, U.S. Army vet living with her parents and younger sister in New York City, is devastated when her boyfriend rejects her for a model who has 13,000,000 Instagram followers. His last words to her are “You’re ugly as fuck!”

When she turns to her two girlfriends for solace, the three devise a plan for Elizabeth to become a social media influencer herself. She is soon a sensation as “Beautybylizboo,” posting makeup tutorials enhanced with her original wacky comfort-food mashups.

Invited to a product launch by industry giant S413, she meets one of their leaders, Shaun, who explains S413’s corporate goal: “to liberate the mind, the soul, the spirit.” Attracted to Shaun, Elizabeth grows bolder and more creative. But how can she protect her hard-won self-esteem as she confronts new challenges?

The story is infused with New Age elements: quotes from Rumi and Napoleon Hill; a mysterious wise man who encourages Elizabeth to “unleash your higher consciousness”; Elizabeth’s realization that “when I gave up the desire of need, that’s when I attracted everything.” Still, Elizabeth’s enlightenment is as different from traditional New Age texts as Lil Nas X’s gallop down “Old Town Road” is from Santiago’s wanderings in Paolo Coelho’s The Alchemist.

This could be positive: Most contemporary New Age writing could use freshening up. Unfortunately, poor writing mechanics overshadow any originality; for example, “I arose sliding up my dress and crisscrossing my two hands across my neck, trying to rip off what was left. I invited Stephanie over to assist me unclothe.” While the dialogue captures modern vernacular well—if you have a high tolerance for swearing—it will likely shorten the book’s relevance over time.

The story’s focus on social media and other timely cultural references may attract iGeneration readers. However, revision to address writing issues is required to achieve a polished work.