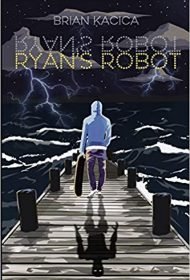 In Brian Kacica’s YA novel, Ryan’s Robot, a depressed 15-year-old boy who loves to perform magic tricks must try to pull off the biggest one yet: to bring his mother back to life.

Ryan’s father Victor is a brilliant artificial intelligence creator who works for Carter Wardlow, billionaire CEO of an AI company in Chimera Beach. Victor and wife Claire worry about Ryan, who has been holding court by staging dangerous tricks. Then while on vacation, a riptide drowns Claire, and Ryan, seen swimming after her, disappears.

Carter eventually releases an AI that Victor created, touting that “Eva” will be the town’s crime fighter. But the townspeople worry about losing jobs to robots, and a councilman suggests that Carter may be planning on using them for military purposes.

The plot grows steadily more complex. Victor has made robot RyN2 in Ryan’s likeness. RyN2, in turn, makes Zar, whose purpose is to use time travel to help Ryan resurrect his mother. Meanwhile, Carter is trying to merge human cells with AI to create eternal life and is also working to develop time travel.

Eventually, Ryan returns to Chimera, and, while he’s performing in a crowded theater, the story offers a final, wholly unexpected twist.

Kacica has a knack for inventing original characters, and with his richly detailed description, many scenes are truly cinematic. Additionally, his dialogue is great fun: snappy, clever, engaging.

Unfortunately, the stable of characters—however well-conceived—is so jam-packed and the plot threads so plentiful, that it’s arduous to follow them all. In addition to elements mentioned, there are two women crazy about Ryan, people being killed and replaced by robots, a mafia boss, a museum heist, a kidnapping gone wrong, torture scenes, and more. All told, it’s a daunting read.

Although the novel offers plenty of intrigue and an edge-of-your-seat ending, such issues may prevent readers from persevering. Still, Kacica shows promise, if he can only learn to trim his stories to their essentials.