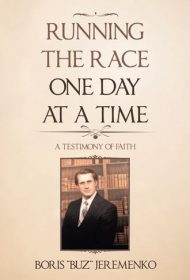 In his memoir, Running the Race One Day at a Time, Boris “Buz” Jeremenko explains how his deep faith helped him through bad times and good.

Born of Ukrainian parents in an Austrian refugee camp, Jeremenko and his family came to the U.S. when he was six years old. His childhood combined elements of his old world – he didn’t speak English when he started school – and 1950’s America. The family’s lower middle class life was dominated by hard work and religion, two traits that became ingrained in him.

After high school, he served in Vietnam, where he was twice wounded and left with a severe case of PTSD, which haunts him to this day. Upon returning, he earned a degree in law enforcement and criminal justice, married, and started raising a family. A varied career as a sheriff’s deputy, store security officer, sales rep, taekwondo instructor and educator followed.

Most significantly, in 1971 he was baptized and born again. It was a turning point that influenced everything he has done since, including the writing of his memoir.

Jeremenko writes in a casual, conversational style (as in: “Boy, did that officer catch all sorts of flak”). The text is easy to understand, but stories are often repeated, sometimes only pages apart. The author quotes Scripture often, and praises Jesus even more frequently — whether Jeremenko is relating stories of success (e.g., accomplishments of his grandchildren) or personal failure (being indicted for fundraising irregularities when he ran for sheriff in the early ’80s). These religious asides can disrupt the flow of the narrative.

Although the book is heavily illustrated with 185 photos, many are blurry and even more have no captions, leaving readers unsure of where they fit into the author’s story.

To appeal to the general public, Running the Race requires further editing and polish. As is, the book is likely to be a treasured keepsake for the author’s family.