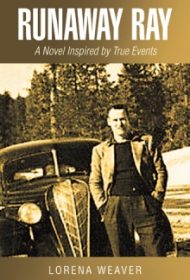 Lorena Weaver’s Runaway Ray is the fictionalized story of three families haunted by the secrets and lies of their father’s past, events over which they have no control or much understanding.

In 1904, 18-year-old Anna Titus is six months pregnant when her husband Jay dies of lead poisoning from working in the mines of Arco, Idaho. Two years after giving birth to Evan Raymond Titus, Anna remarries Ben. Sadly, Ben wants no part of fathering Evan and treats the boy cruelly, kicking him out of the house before he finishes school.

Thus begins Evan’s journey. Now living in California, he marries Esther, and together they have three children. Evan works in bootlegging and is a driver for the mafia. When he gets struck with gambling fever and skims money from his bosses, Evan eventually sees no choice but to run, both to save himself and his family. Next, he marries Velma, who bears him two sons. But when Evan (who comes to be known as Ray) suspects he’s been spotted by the mafia, he again bolts, only to build a third family with Delores.

Told by Lorena, one of Ray and Delores’ children, the novel attempts to piece together the mysteries of Evan Raymond Titus: How many families did he have and why did he run from them? It’s an interesting tale and often colorful, particularly in Delores, who has no interest in actual mothering. (Delores responds to her children’s cries for help by saying  “Shake if off ya’ big baby,” and teaches her children to play poker, Tripoley and Bingo.)

The chronology skips around, requiring close attention to the various wives and children, and a change from third person to first and later back again is puzzling, since third person suits the story well. Despite this, the chronology is easy to follow, for the most part, and those who enjoy historical fiction and stories about imperfect families are likely to find rewards here.