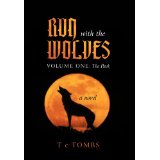 By combining several common dark fantasy elements and adding a few of his own creations, T c Tombs has avoided the biggest problem of werewolf stories: most of them are pretty much the same. Thus, The Pack, the first volume in his Run with the Wolves trilogy, is more interesting than the majority of novels in the genre.

Set in the 15th century, the tale commences as a large pack of two-legged and four-legged “wolves” attacks a farm in the kingdom of Medinia. Amazingly, Willie, a brave field hand, dispatches two of the giant wolves before he is brought down by a severe bite. Despite disagreements among the packs’ individuals, Woodrow, the two-legged pack leader, saves Willie and takes him back to his mountain cabin in the adjacent country of Varakov.

Gradually, readers learn about the lunar curse that inflicts both wolves and men in Varakov and which will inflict Willie because he has been bitten. The author also introduces: Lord Victor, the Varakovan king and shape-changing liege to whom the wolf pack owes its loyalty; the Oddities, a clan of outcasts with physical and philosophical abnormalities who live in the Sanctuary in the forest also populated by the Pack; a ruthless band of mercenary soldiers also faithful to King Victor; and the royalty of the two feuding nations that border Varakov, the previously mentioned Medinia and Skoland.

The Pack succeeds primarily because of Tombs’ talent for characterization. Readers will find empathy for those cursed by the moon as much as for their victims. And their interaction and dialogue are believable. However, the names he has chosen don’t fit with 15th century customs. Princess Hillary Michelle, for instance, has two modern names. Other names, such as Vinnie and Tiffany, also distract from a well-written and addictive first novel.

Also available in paperback and ebook