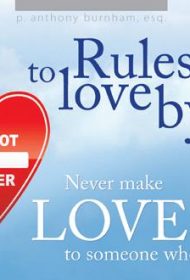 Choosing a life partner is a complex decision, which is why attorney P. Anthony Burnham has written a dating primer for those trying to discern if their current mate is marriage material.

Rules to love by: Never make LOVE to someone who… is filled with straightforward questions Burnham believes individuals should consider when thinking about the kinds of interactions that regularly occur within their relationships. Each section is set up by the subtitle “Never make love to someone who…” as Burnham then interjects certain behaviors he considers to be indicative of inherent character flaws, such as: “thinks aging should be feared; “has never been on a blind date; and “doesn’t know your Birthday.”

While Burnham’s quips add a certain levity to this intimacy guide, there are a number of cultural references, such as “John Galt” and “Dagney Taggert” throughout the text that might puzzle some readers. Additionally, several of Burnham’s suggestions could also be interpreted as misogynistic in terms of promoting outdated gender norms, such as insisting intimacy should not be established with someone who “doesn’t get manicures.” And some of his thoughts seem too personal to the author, rather than applicable universally, as in “Never make love to someone who…thinks spitting is inappropriate.”

Although Burnham never specifies that his book is exclusively for a Christian audience, there are numerous references to God and accessing one’s current love interest based on their spiritual habits—or lack thereof. One section advises to “Never make love to someone who…doesn’t honor the Beatitudes,” revealing that a certain religious affiliation is expected on the part of readers (despite not being previously disclosed in the book’s introduction or on the back cover).

Overall, the book would likely be well served by revision to eliminate unnecessary repetition, correct various typos, and revise Burnham’s opinions to be more easily relatable to a more diverse consumer base.