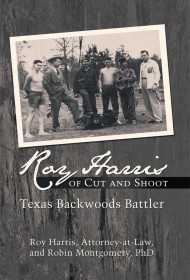 In the annals of self-made men, it’s hard to imagine one with a greater trajectory than that of attorney Roy Harris. The barefoot boxer from Cut and Shoot, Texas, challenged Floyd Patterson in 1958 for the heavyweight championship of the world.

Tallish tales and colorful characters abound in this fascinating but uneven account of Harris’ life, told from two perspectives: that of Robin Montgomery, a local historian, and Harris himself, whose recollections have been inserted into a text first published by Montgomery in 1984.

Like his life, Harris’ tale owes much to its setting. Prior to the 1930s’ oil boom, Cut and Shoot was a dense thicket along the San Jacinto River with clans of frontiersmen raising livestock. The oil strikes attracted a motley crew that made defending one’s property more necessity than sport. Harris was born into this culture, and with his father as coach, began boxing at age ten, when he and his older brother traded two ducks for boxing gloves.

A reluctant fighter who preferred to read, Harris nonetheless won six consecutive regional Golden Gloves titles. He turned pro in 1955, and although he lost in the 12th round to Patterson, Harris received so much fan mail that Cut and Shoot had to open a post office.

This biography is hampered by its meandering narrative and chronic overuse of dialect. (“I had fun what was slap-dab funny.”) Harris’ straightforward recollections are welcome respites from Montgomery’s occasional outbursts of overwriting. (“A sense of sinking knocked on the door of Roy’s brain, but before the brain could answer a jagged thunderbolt tore out of the whirlwind before him…”)

Montgomery is at his best when he tones down his rhetoric and lets the facts speak to a vanishing way of life and the commotion that ensues when worlds collide. But in the end, it is Harris himself who holds readers’ attention and makes this a worthwhile, if sometimes flawed, reading experience.