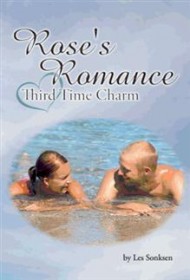 As someone who, according to this book’s acknowledgments, has shared experiences with those serving in the United States Navy, author Les Sonksen, centers his story on 18-year-old Rose, who works and lives near the Norfolk Naval Station.

Given an ultimatum by her father, Rose has two weeks to move out, even though as a beautician she does not earn enough money to support herself. Rose’s friends, Joe and June Reilly, rescue the heroine and introduce her to sailor Marvin Brown, who becomes Rose’s first romance. Though Rose and Marvin seem ideally suited to each other, several complications spoil this romance, only to lead Rose to another relationship with a drug dealer.

Through a series of unbelievable events, Rose is eventually arrested and serves time in prison, after which she reinvents herself with the help of the FBI and finds a third romance. Amidst heartbreak, disappointment and prison, Rose never loses her positive attitude – to the extent that she appears one-dimensional. Though the reader is repeatedly reminded by almost every character in the book about how special Rose is, there is little in the plot line to back this up.

With the exception of a prisoner known as “Big Bertha,” it is impossible to distinguish one character’s dialogue and mannerisms from another. Long and unnatural stretches of dialogue bury a promising plot and confuse the reader. Although the story picks up the pace in the third part and works through some of the awkwardness, the dialogue remains a problem.

Romance fans may find satisfactions in the story, but only if they are patient enough to keep reading through the awkward beginning.