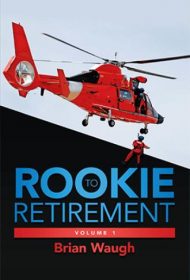 In his memoir, British author Brian Waugh shares a wide range of interesting personal experiences spanning from 1960 to 1990, including his career as a police officer.

The author was born into a working-class family in 1937 and raised in Gateshead, County Durham, with a large extended family. His introductory chapter sketches out his school years and how he met his wife, Jenn, who he married in 1958. They had a son and twin girls.

After a stint as a diesel engine mechanic and in the army, Waugh joined the Gateshead County Borough Police, where he served various roles, including as a police dog handler and murder investigator.

When it comes to the latter, he doesn’t skimp on grisly details. He describes a sexual assault and brutal murder of a young woman: “The perpetrator had placed some large empty bottles neck first into the vagina and then hammered them into her body with a twenty-eight pound hammer.” Recalling the sight of an old man found dead, he writes that the man “had been lying on a live electric blanket for about three weeks, and where the blanket touched his skin it was bubbling like something simmering in the pan. He had several cats, which had been eating his flesh.”

The author’s voice is clear, honest and genuine, and his willingness to be transparent about his feelings and insights is endearing. Readers will be intrigued by the level of detail and the breadth of experiences. Sketches and photos enhance his stories.

The story has some technical issues, however, including incomplete sentences and improper punctuation. Paragraphs are often unfocused and some vocabulary will be unfamiliar to American readers (“yobs,” “sussed,” etc.). Additionally, the ending is disappointing. Describing following a thief, he stops mid-story with the words: “To be continued in volume 2.”

Nonetheless, this is a fast-moving and interesting narrative overall. Many will look forward to Volume 2.