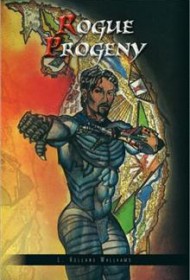 In 2333, Earth’s space colonies depend on androids, which have made manufacturing companies rich and given rise to a class of cyborg pirates that feed off them like parasites. When Deadalus Jones, war veteran and private investigator, is hired to find a rogue android, he stumbles into a web of conspiracy. Androids are mutating — gaining free will — and there are plenty of people who would like to keep that a secret.

Rogue Progeny is a smooth mix of post-cyberpunk noir and old-fashioned space adventure, complete with the hardboiled PI (Jones), the girl in distress (a sexy android programmer), the femme fatale (the governor’s daughter, who has a predilection for android romances and archaic firearms), the crime boss (a menacing cyborg pirate), and a vast, shadowy network of politicians and company men looking after their own interests. Williams owes a debt to Phillip K. Dick, or at least Ridley Scott, but Rogue Progeny doesn’t dwell on the philosophical implications of its world too long, focusing instead on all of the sleazy, sexy, double-crossing fun.

There are a number of typos in Rogue Progeny (tense problems, punctuation, etc.), and some of the transitions are a bit choppy, as perspectives shift abruptly between characters and locations. Scenes could be unpacked a bit, and characters more developed. Though sometimes predictable, the dialogue is clever (as when Hazel, Jones’s computer secretary, teases him about a love interest: “You want her biological profile, don’t you?”) and we could use more of it. However, beyond those detracting points, Rogue Progeny is an enjoyable read. It aims simply to entertain, and it certainly hits that mark.