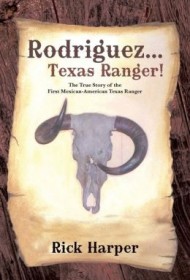 This engaging biography focuses on Arturo Rodriguez, Jr., a man who rose from poverty in a South Texas barrio to become the first Mexican-American Texas Ranger. This was no small feat, as the oldest law-enforcement agency in North America —founded in 1823 and romanticized for generations by dime novelists and Hollywood mythmakers — had a long history of bigotry aimed at “Meskins,” Native Americans and blacks.

Rick Harper, a San Antonio real estate broker with deep family roots on both sides of the Rio Grande, acknowledges the Rangers’ sins—from their murderous vigilantism in Mexico from1915-17 to the brutal suppression of Cesar Chavez’s striking farm workers in 1967. But Harper is also a Texas-proud upholder of macho legend. “The fact is . . .a Texas Ranger is just plain. . . . cool,” he writes. Two of his own forebears wore the star, and he praises his friend Rodriguez as “A REAL-LIFE HERO!” — not least for the abuse he endured from both gringos (who saw him as an intruder) and Chicanos (who called him a traitor) when an old-guard, Mexican-hating Texas Ranger captain named Alfred Allee surprisingly approved his application to the elite force. This seems to be in 1970, although the book neglects to fix the date.

Rodriguez himself had mixed emotions. “It was the greatest thing that had ever happened to me,” the former small-town cop told the author, “and the worst.”

Harper provides vivid background about shady politics and ethnic friction in South Texas. And he honestly reveals his own conflicts: “a large part of my being, of my core, and most certainly my heart . . . is Mexican,” he writes. But he has no problem if Chicanos view his book as “exculpatory on behalf of the Anglo.”

Unfortunately, he never addresses the bigoted Captain Allee’s motives in appointing Rodriguez, a large void in the story. Still, this is a fascinating read about changing times in Texas and one man who beat the odds.