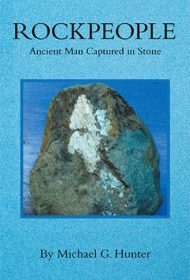 In his slim book Rockpeople: Ancient Man Captured in Stone, Michael G. Hunter posits that there are petrified miniature people in rocks all over the earth.

“In the 1970s and 1980s,” Hunter states, “the Japanese paleontologist Chonosuke Okamura concluded from his observation of rocks that there were miniature people on Earth that became embedded in 400 million-year-old Japanese limestone.” Hunter found Okamura’s observations “quite reasonable” and relates the results of his studies based on Okamura’s work. While aware that his book is “unlikely to become accepted,” Hunter points out that neither, at first, were the theories of Copernicus, Galileo and Newton.

In addition to “miniscule” people petrified in rocks, Hunter notes that there are also fossilized people sometimes “larger than ourselves.” They wear clothing, carry instruments like bagpipes and telescopes and are accompanied by animals like dogs and dinosaurs.

The fossils are, Hunter writes, “at least fifty thousand years old,” and the people involved were likely flash frozen “when the Earth passed very quickly through a gaseous medium that was very cold.” After that, “the frozen bodies were siliconized or petrified before they thawed.” Hunter also discusses moon people, the collision of planets, and life on Mars.

Hunter takes a colloquial approach to his subject matter, easily admitting, for instance, that he has “no logical explanation” of how evidence of little beings could be petrified in coins. He takes for granted that his photograph of two tiny footprints on a Lincoln penny are just what they appear to be. Most of the images in his photographs are extremely blurry. He, nonetheless, uses them as proof for the existence of little people.

Despite requiring suspension of disbelief, Rockpeople is fun to read. The idea of miniature people walking dogs with even “tinier people…on their shoulders or in their hats,” can only bemuse. The book fits well on the bookcase with other speculative science titles like Velikovsky’s Worlds in Collision and Michell’s View Over Atlantis.