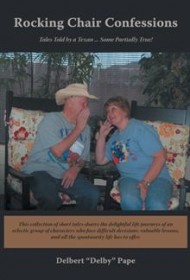 This slight volume of 23 short stories is a collection of unrelated tales, each with a different narrator and only three or four pages long. Author Delbert Pape tells every story in a confidential tone, as if readers are being let in on the narrator’s secrets. Some involve “ghostly” mysteries, others murders or fraud, and still others secrets from childhood.

The stories in Rocking Chair Confessions are fun, often quirky, told with a wink and a nod. In perhaps the best, the narrator details her rise in a grocery store chain: “I prepped myself for the interview… After I got dressed up I looked like a prom queen – and my green eyes were stunning, I might add.” The story is wickedly amusing, as the narrator realizes how to get ahead: by sleeping with Red McKnight, her boss, every Monday. “Two years later,” she notes, “I was promoted to district manager. …Last spring came the promotion of regional manager when Red mysteriously died.“

The author slyly doesn’t expound on Red’s death. Instead, she picks her favorite store clerk to take her old job. The upshot? Well, let’s just say she had learned a lot in her on-the-job training.

Pape moves easily from a female voice in some stories to a male voice in others, maintaining a smooth-as-molasses style. He obviously doesn’t take himself too seriously – nor do his narrators. Says one, “I no longer play harsh jokes on others at their expense. I’ve learned my lesson. My jokes and pranks are now toned down to more moderate, acceptable social situations, but I still like a good joke. Do you know any?”

As with all short story collections, some tales are better than others, but in Rocking Chair Confessions, they’re all quick, cheerful reads.