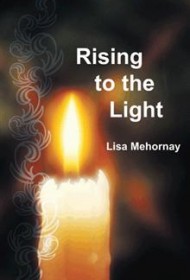 In 1936, Lisa Mehornay was a young child in Leipzig, Germany, when her father, distressed by the politics of his homeland, tried to persuade the family to move. Her mother objected to being uprooted, sensing no imminent danger because “we are not Jewish.”

Rising to the Light is Mehornay’s account of growing up in Germany during World War II and the life that followed. This is her personal journey of reconciliation and redemption. And what a journey it is.

At ages seven and eight, the author was mildly scared of a neighbor who made her give the “Heil Hitler” salute, upset by the dissension in her family and unsure of why Jews were being singled out. As she became a teenager, her father and brother were drafted. By 1943, she had barely survived the Allied forces’ air raid on Leipzig, and later, a countryman sold her out for the price of a watch as she tried to move from East Germany to West Germany to find work. Forced to trade favors with American soldiers for rent, she became pregnant, decided to marry the baby’s father, and move to America.

But there was no happily ever after — not in the beginning anyway. Once again, she was pushed into survival mode. Despite their marriage, she and her husband were strangers; he sued her for desertion when, due to his lack of financial support, she was forced to move from job to job and town to town. Eventually, she decided to let her son grow up with her in-laws, rather than disrupt his life.

Clearly Mehornay’s moral choices have haunted her. This straightforward, unemotional account is a chance to set the record straight. Those interested in political commentary should look elsewhere, as the book only briefly hints at Mehornay’s feelings about Germany and the war, focusing instead on her personal struggles. But those facing adversity in their own lives may find inspiration in the author’s path to peace.