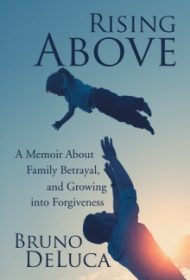 In Rising Above, Bruno DeLuca tells the story of his troubled relationship with his father, Giovanni, blending it with the rise of the family bakery and the author’s own personal and business experiences.

The memoir begins in 1943 Italy, the year Giovanni was born. The family was so poor that bread, “their most valuable item,” was stored in a safe and rationed among Giovanni and his six siblings. By age 12, Giovanni convinced a shopkeeper to loan him a case of soda pop, reselling it to local paisanos for a profit.  From there, he immigrated to New York and eventually Canada, where he married.  By the time the author was born in 1966, Giovanni had begun to form the foundation of a bakery that, with the help of DeLuca and his younger brother, Rocco, would become the largest independent business in Ontario.

But Giovanni was no angel. Along with cheating on his wife, he was dishonest about money and verbally abusive to his sons. “He was never there for me and didn’t care about anything in my life that I wanted,” writes DeLuca. Of course, extricating himself from the situation was easier said than done, considering that both family and business were involved.  How the author manages to do so—and forgive both himself and his father—is a triumph of faith, spirit and hard work.

Yet the book falls flat when attempting to render insights. Discussing damaging relationships and bad situations, DeLuca employs platitudes such as, “Everything in life takes hard work. Nothing is easy.” And occasionally he digresses, such as when, during a discussion of prejudice in the 1950s, he veers into seemingly unrelated details about his relationship with a black woman decades later. An unintentionally amusing blooper—hiring employees “to fill specific rolls”—along with odd capitalizations, punctuation errors and typos also prove jarring.

Despite such issues, this is a fast-moving family drama. Readers who appreciate such narratives will find it an entertaining read overall.