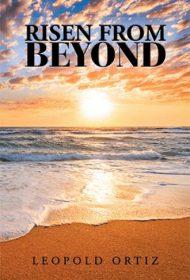 Leopold Ortiz’s Risen from Beyond provides an account of his life, work and travels.

The cover art featuring a dramatic view of sun and clouds could lead one to think the title refers to Jesus’ Resurrection or life after death in some form, but with this picture, Ortiz seems to be referring to “rising” from his lower-class roots. Born in El Paso, Texas, the family moved to Martinez, California, in 1927 and then settled in Pittsburg, an industrial city in San Francisco’s East Bay area.

In an unconventional structure for a memoir, the narrative is told by theme, rather than chronologically. Chapters have titles such as “Education,” “Sports” and “Memorable Christmas Holidays.” Thus, the story jumps around in time, gathering in one place details, for example, of his jobs—repairing warplanes that battled the Japanese in WWII, during his Navy career; serving in the Navy and Air Force reserves; doing design and engineering for Phillips Petroleum; and working as a civilian at an Army base in Oakland, California —instead of spreading them throughout the book.

The memoir is long on lists, photographs and family data, such as his children’s and siblings’ names and birth dates and the short section on his two wives. But Ortiz’s charming personality comes through as well in amusing anecdotes, such as how his first wife’s false eyelashes fell into her cocktail or his second wife became stuck in an elevator. He also offers offbeat information, such as noting where to find the best hot dogs in the various towns where he lived.

Given his warm, personal recounting of shared experiences and the numerous photos, this book seems intended as a family memento rather than for general readers. It’s a memoir the family will no doubt treasure.