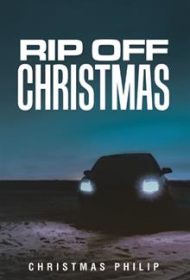 Rip Off Christmas is author Christmas Philip’s memoir of his life as a “drifter” who was born in Jamaica, moved to England as a young boy, and traveled throughout his life.

Young Christmas is raised by his grandmother in Jamaica. When his parents move him and his brother to England to live with them, it’s a big adjustment: Teachers who are openly racist make school difficult to enjoy, and his parents fight constantly and are poised to steal any money he earns as he grows older. Later life is filled with romantic entanglements, some of them contentious, the birth of children and then grandchildren, and travel in Africa.

All of this could make for a compelling story, but the prose is extremely challenging. Philip’s writing is laden with spelling and grammar errors that make comprehension difficult and often impossible. Consider this sentence from a passage about Philip’s pet cat and dog: “Because like a child to a parent, you think about if your child is dead, if your child is being kept worm [sic] and being you in your taught it’s about all those little nice plans you had in mind for your loves [sic] ones could happened.” With so many errors, the book becomes largely indecipherable.

Toward the end of the narrative, Philip returns to England and begins to plan a business venture with a friend, but things appear to fall apart. Here again, the prose is hard to follow and the reader is quickly left behind: “…I was beginning to my little sustentation [sic] of his personality. I could scene [sic] that if I don’t ask him about the project planning progression he does not inform me on the steps that he is taken to achieve our Goal.”

It’s likely there’s an interesting story to be extracted from Rip Off Christmas, but thorough editing and proofreading is required before readers can enjoy the journey.