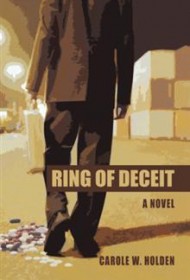 Drug money. The words conjure images of cocaine caches and the millions of dollars they bring to illegal drug smugglers. But what if the drugs in question were perfectly legal? From Nigeria to New Jersey, something suspicious is going on in the high-stakes world of prescription drugs in Carole W. Holden’s fourth novel.

Ring of Deceit is a thriller that opens with dire medical emergencies on two continents a world apart. First we meet Babatunde Akanbi, a Nigerian man whose sister is dying because her diabetes medication has inexplicably stopped working. Then we learn of Cece Gardner, a New Jersey artist struggling with the apparent suicide of her best friend Frank following the AIDS-related death of his partner. A trail of clues suggests that an international ring of counterfeit drug smugglers is behind all three tragedies, and both Babatunde and Cece are willing to risk their lives to catch the culprits.

The story unfolds largely through the eyes of the intrepid Cece, a college professor by day and an amateur sleuth by night. As she uncovers the circumstances behind Frank’s death, she also creates an in-depth portrait of this beloved artist and teacher who took some unusual secrets to his grave. Cece and Frank are the most nuanced characters, in contrast to the explicitly evil counterfeiters and the overpopulated cast of underdeveloped minor characters.

Holden maintains some suspense with quiet, creepy scenes, such as Cece crossing the police tape to explore Frank’s abandoned apartment on the night of his death. Narrow escapes alternate with fast-paced action sequences — car chases, kidnappings and more — that play out like scenes from a popular movie. There are few true surprises, though, as the bad guys and their plans are identified in the early pages. The only question is what will happen when they are caught. Still, readers who have come to believe in the protagonists’ cause will continue to the end to learn how justice is ultimately served.