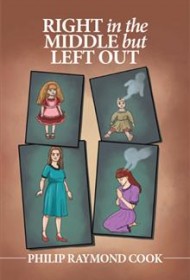 The statistics are beyond disturbing: One in nine girls under age 18 in this country is sexually assaulted, with more than a third of the crimes committed by a parent, step-parent or other family member, according to the Rape, Abuse and Incest National Network.

When such horror occurs in a family, usually cloaked in layers of secrecy and denial, the eventual fall-out can be felt not just by the victim but by everyone around her. Here, Methodist minister Philip Raymond Cook writes of how his life and career unravel in the wake of the devastating discovery that his wife had been sexually abused decades before by a series of male family members.

This could have been an unblinking look at how those closest to a victim struggle to find their place as their loved one works through the memories. “The reality was, it just got darker and darker, and whenever a light was turned on, my wife would knock it out and destroy,” Cook writes. In the book’s best moments, there’s a searing rawness to how the author’s own rage mirrors his wife’s and how, as a man of faith, he doesn’t know what to do with it. “I was beginning to know what it meant to be abused by her abusers.”

But ultimately, Cook seems uncertain of his purpose. For most of the first half, he writes entirely about himself, cataloging his childhood and choice to enter the ministry. He hints that his wife is unhappy as he moves from church to church, but he doesn’t explore her feelings or personality in enough depth to foreshadow the bombshell that’s coming, and readers will wonder why he’s writing so much about himself and so little about her.

Those who have walked in his shoes may see themselves in his story, and that has value. The most powerful chapters are when his dismay and confusion resonate as his wife leaves him and his well-ordered church life crumbles. Had he mined that more, he would have had a truly important book. Instead, his narrative suffers from narrowness bordering on self-absorption, and Cook, sadly, misses the wider audience.